Many insects are still out foraging in late-summer, it’s a good idea to provide food for them with nectar-rich, late-flowering plants.

While some plants have finished flowering, bees, butterflies and hoverflies are still on the wing, foraging for food. Nectar provides insects with energy to fly and builds them up for winter hibernation. By growing just one source of nectar-rich food, you can improve these insects’ chances of surviving the cold months.

Insects you’ll attract to your garden include buff-tailed and common carder bumblebees, honeybees, hoverflies, comma, painted lady, small tortoiseshell, speckled wood butterflies and the angel shades, dart and brimstone moths. Some will still be found foraging on flowers in November, while – in the south of the UK – some buff-tailed bumblebee colonies will remain on the wing throughout winter.

We pick some of the best plants to grow that will provide pollinators with a source of late nectar.

Nectar provides insects with energy to fly and builds them up for winter hibernation.

A tall, delicate plant with a long flowering season, particularly attractive to butterflies and moths. If left to seed, Verbena bonariensis will naturalise all over the garden.

This climbing evergreen provides a supply of nectar and pollen until late November. Holly blue caterpillars also feed on ivy leaves, while many other insects hibernate in its foliage.

A wall of dark-green ivy

Late-flowering buddleja supplies insects with nectar when others have finished flowering. Pollinators attracted to its blooms include bees, moths and hoverflies.

Sedums, many of which are now called Hylotelephium spectabile, are a trusty, late-flowering favourite. The plant’s pink flowers make the perfect landing pad for pollinators such as butterflies, moths, bumblebees and honeybees.

Michaelmas daisies, named after the feast of Michaelmas, which falls near the autumn equinox, Symphyotrichum novi-belgii flowers will attract butterflies, moths, bumblebees, honeybees and hoverflies.

Rather than clearing your borders in autumn, leave the plants standing so insects and other wildlife can take shelter until spring. Birds will also strip seedheads – often in large flocks – giving you a wonderful show. 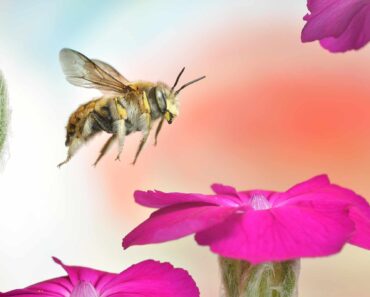